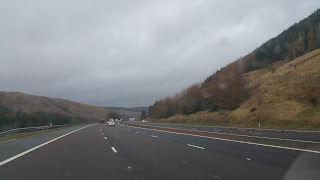 This was the first time I had driven all the way to Glasgow (and beyond). This for the launch of +Link4Growth in #Scotland. Although hugely exciting it was also with a tinge of sadness as +Link4Business was launching on the same evening in my home town of #Watford. I couldn't be at both and with huge support already in place for +Jean Flower in Watford I took the long road north. 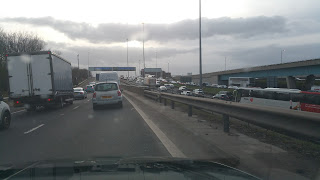 I left a good 9 hours for the journey and needed almost all of them as faced a closed section of the A74(M) due to a lorry fire and then a slow trawl through Glasgow as I hit the rush hour due to the delay. There are a lot of roads in Glasgow... and most of them were full with vehicles... my years of London driving experience served me well as I navigated my way through what seemed like a 4 mile spaghetti junction. The SatNav served me well until I realised I was in a farm courtyard on School Lane... I had noticed a rather grand building on the right (not left Mr. SatNav) some moments earlier and so quickly reverted to 'manual' to arrive at my final destination... and what a destination it was... 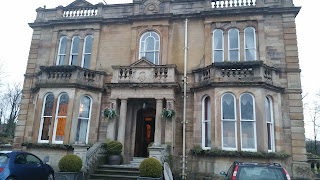 Moorpark Hotel lived up to its billing in every way... a wedding reception destination this 1860's building (A house belonging to the Mill owner in the town) was delightful and the people here were amazing also. Exquisitely restored the interior was just as lovely. Andrea McGuinness who was hosting the 1st ever Link4Coffee here in Scotland was already at the venue... I expected to be there at 5:00pm but with the delays it was 6:15pm before I arrived.

We were quickly set up and a quick change out of travelling clothes and we were ready as people started arriving before 7pm. In all 28 or so people made the short trip up the hill to the hotel for this inaugural event and history in the making. 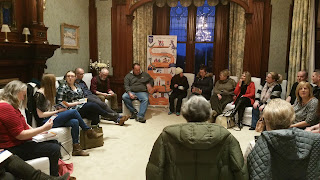 As this was the first event north of the border and will so many people who were experiencing Link4Growth for the very first time... I decided to introduce Link4Growth and address the group as a whole. This was not about a team of people from London once more coming to tell the Scots what to do... no, this was about providing an idea for change that the people of Scotland could make their own and create the future that they want for their country. This was to be a most incredible evening. Everyone I spoke to said the same thing :-


We never get an opportunity for the people in the community to get together and just talk. I had no idea what was going on here in the town, I have had so many fascinating conversations, met interesting new people, and learned so much. What a fabulous evening.

I made a lot of new friends in Scotland, learned loads about this part of the world and thoroughly enjoyed myself. Massive personal thanks to Andrea whose diligence and attention to detail ensured everything went like clockwork. More information about the 24th March on the Link4Growth Blog.