Political decentralisation... the next step after Brexit mess? 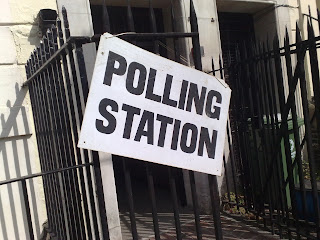 With the Local Elections around the corner eyes are drawn away from Brexit for a moment.

These local elections are being earmarked as a barometer for how the electorate are responding to the fiasco in downtown Westminster at the moment. Except... as soon as the Brexit extension was agreed, the place was vacated; Easter holidays!

Local elections have typically had a much lower turnout than General Elections. Seemingly less significant somehow and yet... it is the people on the ground locally who act as councillors that have the illusion of power in our own communities.

But ... maybe times are changing?


With central politics in real chaos, the party system failing miserably, what we are maybe witnessing is the collapse of a dinosaur... a prehistoric animal fighting for life as its world begins to disintegrate around it.

The basics of the government world still persist as virtual armies of civil servants continue to keep the wheels turning, whilst the self serving (not all), ego driven, politicians, squabble like children in a primary school playground.

But maybe we have stumbled on the moment in time?


With disillusionment rife on all (and every) side of any political fence that has ever been erected, we have now been shown in glorious triple HD technicolour how absolutely unnecessary these MP's have become.

Countries in the past have miraculously continued to function for quite a while even without governments... so maybe the time has come, to, in the words of Brene Brown "Dare Greatly" ... and push the envelope just a whole lot further... to entertain the idea of decentralisation... with just a core team of 'transparent' guardians at the centre looking after our best interests. Details to be thrashed out of course. Then, the local decentralised infrastructure we already have in place 'Councils, Municipalities' could be reworked to provide local decision making.

Different parts of our island require different approaches, always have. We've just been enforcing a centuries old model on people because the status quo is easier than change... what happens when the status quo no longer cuts it? ... We wouldn't miss these MP's anyway would we?

The road to Transition


We are in exciting times... the opportunity to co-create something magnificent, something that is really working for the majority not the small minority. Not some thin veil of manipulation, deceit and control, dressed up to look like we have a say, when of course a swift reality check reminds us we don't.

Look at the health service we all want to keep and have been campaigning for almost 40 years to save / improve... still regarded as our best service, 'free at the point of use' and slowly (against our wishes) being torn apart and disintegrating before our very eyes, against our wishes!!

What about Banks and big business paying their dues? ... everyone wants it... well almost everyone and yet still this leaking tap is not fixed... and the rest of us... the easy to control fodder, keep paying dutifully because we are told to be a good citizen... is this fair? ... is this right? ... No... so why do we keep voting for it??? ... the lies, the promises ... NEVER delivered... you could not make this up, really...

So here's an outline plan...

Step 1 :
Raise the importance of the local elections. Transfer more power and autonomy to the local councils

Step 2 :
Move away from Party driven local politics to... independent councillors. Councillors who put the people of the town before everything else... and have demonstrated this in practice. So moving away from central politics led local decision making... we don't need it or want it.

Step 3 :
Introduce the "Community Promise". A set of behavioural standards that anyone wanting to hold a public office has to agree to abide by. An independent body would be appointed to adjudicate over breaches of the community promise... with support to rectify and overcome these challenges. Repeated breaches would require stepping down.

The community would be transformed by a new generation of selfless leaders demonstrating compassion, kindness, humility and love... A far cry from the current crop who are more interested in money, fame, popularity, and climbing the political ladder.

The future of public service is caring what is going on for those in our community and wanting the best for the people in the local area...