As we approach the 19th July "Freedom day", the reporting frenzy and media has already began to cite the likelihood of a 4th wave, and potential new measures in order to control variants of the virus.

The Sun newspaper here in England has mentioned that the Prime Minister has already said that although vaccine passports will not be required for now, they can not be ruled out in the future. This does sound an awful lot like the softening up process that we have come to expect from the Government and that we have bourn witness to many times before.

With now half the population vaccinated it does seem a little bit strange that numbers are going up, in fact higher now than any time since February earlier this year. Something appears to have gone slightly awry. Either the numbers aren't right, we're counting the wrong things, the vaccines aren't as effective as touted, or the ones who haven't yet been vaccinated (the young and the obstinate) are more dangerous than ever before... there is always the idea that this was never THE huge problem that is was bigged up to be, and now the cracks are appearing... just throw that in for good measure.

The reason for writing this blog is just to share from personal experience of how one person (that'll be me, plus one other maybe, or two, or three or as many as wish to participate) are coping with the reduction in freedoms and increased separation as the Virus story continues to unfold. 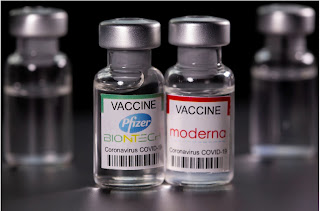 I know for many they would throw the book at me, sling me in some kind of jail or mental institution for being obstinate, ridiculous and pathetic. Quite simply I appear unable to be trusted to make this rational decision and therefore am putting other people's lives at risk, even though, all respect is given to those who are shielding or worried. You can see where this is going... and not being heralded in by the government, being demanded by people who believe the current narrative and consider their opinion is "right". This is beginning to sound like... either you're with us or you are against us (Trump).

Don't hold me to this one, but I believe this is the first time in history we are being persuaded, bullied and manipulated into having medication (en masse) to protect other people. Worse still having to get vaccinated so that you can just go on holiday. I know that the only reason for having the jab for many is because they want to go overseas to enjoy themselves, actually bugger all to do with health at all!

As a person who eats healthily, exercises, takes notice of the issue my body tells me about, I have managed to stay well and on my feet for years without recourse to going to a doctor (my last doctors visit was back around 2005 or thereabouts and then just a mild throat infection, I deal with these myself these days, infrequent though they are). Lucky you! I hear you say, maybe, but that response could be part of the problem. Looking after yourself is something you have to learn about and work on, actually far removed from luck, but easier to offer that up as a reason than actually getting stuck in.

Here's a question... why should I be injected with an experimental fluid of a dubious nature when I am perfectly well, and because, someone else (a growing army so it seems) thinks it is a good idea for me? Where is my freedom of choice to make my own decisions?  To be honest if people want the vaccine for whatever reason they are comfortable with, I respect their decision, all I ask is that I am extended the same courtesy, because, thus far no credible evidence has been put forward to convince me of anything, and I do spend time learning about the body. 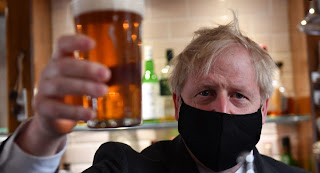 To be honest I really think Bojo has had enough of the virus, I think he and his friends have made the money (pots of gold) that they saw as dollar signs dangling in front of their eyes, and they now want to get the country moving again. The trouble is... people are frightened, they are fearful and scared. Who can blame them?  18 months of consistent bombardment about the severity of this illness (literally nothing else really), as people have been locked up and almost force fed the Covid story.

What might now be in full force is the might of the pharma companies, their backers and getting the whole world vaccinated... there is so much money involved, and control, and the promise of a very dystopian future. Now with a fearful population, Bojo is looking more and more like merely a "means to an end" who's sell by date is fast approaching...

In this blog from time to time I will record how life is shaping up without a Vaccine. What restrictions are being placed upon the "great unvaccinated" and how this is impacting daily life and changing what we deemed "normal activities" for an adult living in the UK. The sun reported entering a restaurant or bar might require a vaccination certificate come the Autumn... and if so, then that's out then!

Anyway... the story begins... it shall be an interesting journey... let me conclude by just saying. I bear no ill feelings to anyone on this subject or any other... we are here on the planet for a very short period of time, and I will continue to strive to live in harmony with all around me.